Take Me to the Hospital for Real

I had an appointment with the doctor today. She is in a new building, which I think is beautiful in a subtle way, not that she’s there but the building is beautiful. I had to go to the top floor and wait in the reception area.

In the old building, I sat in a Psychology Department mail room in one of two chairs and said hi to all of the nice people who always glanced at me with a troubled look. (I like to think it is because I didn’t brush my hair, but I think it is because they don’t think I’ll make it – Luckily, they’re just students.) So in the old place, I always felt like I was at home in an old musty INSTITUTION, just where I needed to be but not locked in. The only disturbing thing was that they had a sign at the entrance of the Buddhist Garden that said “Under 24-Hour Surveillance – Vandals will be prosecuted.” I think if Buddha saw that sign, he’d vandalize the garden for the fun of it.

Today, I felt like I was going into an empty, sterile place dropped out of the 50’s (mind you I am not trained as an architecture critic – I just admire the stuff from afar), and I had a feeling that if I went in, they would take my brain out and freeze it, which would almost be as bad as a lobotomy, but more successful. At any rate, while having these thoughts, I noticed with peculiar delight the two “Do Not Enter” signs which must be the most ill-situated signs of all time, not due to the message to the patient, but because these signs completely ruin the feel of the architecture. If I were the architect, I would come over at midnight and rip them out with my Dodge truck: 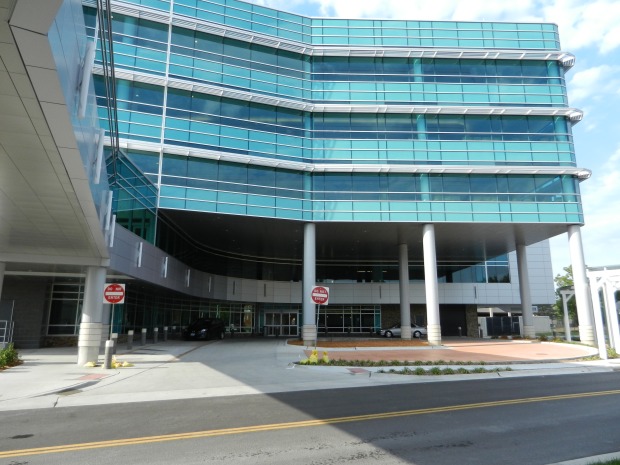 And the tallest tree in the background of this next shot, beyond the walking bridge (why do we need those anyway? In case it gets below 40 Fahrenheit?) is the one that I thought was dead like my spirit was in April, but both it and I are doing better:

My tree, Alive and Very Well

And here is the view I was afforded as I was leaving – I worked a lot of years in the twin tower on the left, but they disposed of me without so much as a wink, which tends to diminish my level of self-respect:

My Old Workplace, Haunting Me

And then there is this last view – If  it were two stories shorter and didn’t have that appendage on the right, I’d swear it was a high school building from the late 50’s, and I think, you know what that means? The 60’s are coming soon. Hang tight!

OK, I’m no photojournalist, but boy was this building singing such a woeful tune to me today.

This entry was posted on August 15, 2011, 10:58 pm and is filed under Essays. You can follow any responses to this entry through RSS 2.0. You can leave a response, or trackback from your own site.