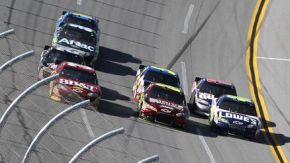 I’ve never demonstrated skills at being a sports writer, as you’ll see, and I’ve always wondered how one stays inspired, but I was inspired by the recent weekend of racing.

Two-car, stupid racing. Fake drama. Fake cars. Bring back the showroom cars. Get rid of the generic.Fake drama. They say non-stop drama. Bad for them. There’s no action until the checkered flag. Well, the white flag. They are selling the advertising by spitting soup about generic vehicles without personalities. They speculate on motive, on mistakes, on strategy problems, but at Talladega these days, it’s only luck. The only skill is tuning your radio and not closing your eyes. They say “Sunoco Fuel” instead of fuel for more money. Thus, I hate Sunoco. Two by two is dull. Dull, dull, dull. The announcers try to tell you that someone is pulling away, but they are full of shit. No one ever pulls away. There’s no racing. It’s ESPN trying to make money on racing that NASCAR has ruined. “We’ve seen that countless times before, about five or six.” Define countless? five or six if you are selling boredom. “Look at this crowd. Not one person is seated.” I saw one. “Listen to the crowd – They’re lovin’ this.” No, they’re not. They’re getting drunk on the shit you guys are selling.

This entry was posted on April 17, 2011, 9:58 pm and is filed under Essays. You can follow any responses to this entry through RSS 2.0. You can leave a response, or trackback from your own site.